I was pretty obsessed…

Seriously. I was obsessed.

I mean, it was January 1 and freezing cold out. Yet, there I sat in my beat up Subaru wagon outside the public library, leeching off their wi-fi on a Holiday morning.

While many were hung over from New Years Eve, I was staring at the little blue progress bar crawling across my screen as the first LearningHerbs pages slowly uploaded.

I had just spent months working on the Herbal Medicine Making Kit design in every spare moment I had. I was working at a non-profit that I helped start, going to acupuncture school, and raising two kids. Hailey was a newborn. I was pretty busy.

I didn’t own a laptop, so I borrowed one from work in the off hours. I only had dial-up internet at home. Besides, there was no quiet space to work in our tiny one-bedroom apartment. So, I sat outside that library many nights. I also spent hours at a local cafe on a couch, frantically typing away.

I didn’t have any free days between work and school, so the only extra income I could get would have to be via my own creativity. We were also on food stamps and used the food bank. I was hoping the Kit could make us an extra $200 or so a month. I dreamt every night of getting out of that dingy basement apartment.

When I was nearly finished with designing the Kit, I had a realization…. I needed a website to sell it. I never built a website. There were no simple website builders back then, or even Facebook! So, I dove deep into the world of website creation.

I had actually registered the LearningHerbs.com domain name and let it go twice before. It kept coming to me in this dream. I had no idea what to do with it, which is why I kept letting it go. However, I finally figured out what that dream was about, so I registered it a third time.

I had no idea I was even starting a business until a friend pointed that out to me. I didn’t know anything about budgets, spreadsheets or business plans… still don’t. When the banker asked me what name to register my new checking account under, all I could think of was “LearningHerbs.com,” as this was the website name. I didn’t realize my business even needed a name. Some people take weeks to name their business. I did it in 10 seconds.

Something bigger than myself was driving me to do this. It wasn’t just the extra $200 a month. It sort of felt like a mission, which is where the obsession was coming from. Many times in my life I have no idea why I’m doing something…I just feel like I have to do something…so I do it. And I did it.

When I came up for air after 9 months after starting this project, this is what I launched… 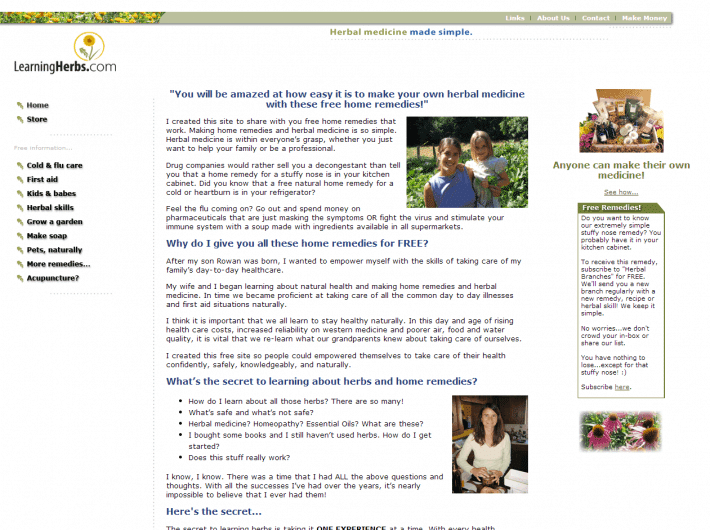 What happened between then and now has been an incredible journey, and these are stories for another time.

I am here today to celebrate the BRAND NEW, built from the ground up, completely reimagined, beautiful, easy to use and inspiring LearningHerbs.com!

This new site recommits us to our original roots and mission of “herbs made simple.” It focuses and clarifies who we’ve been all along, and shows you where we are going.

It has just about everything the old site had, and a whole lot more.

What you see in front of you is just the beginning.

This new site was created by LearningHerbs Design Director, Jan Bosman. He redesigned HerbMentor a few years back and we are grateful to have him on staff.

Althea Cunanan, who has been with me 7 years, worked insane hours transferring information from the old site. Thanks to Althea and Jan!

Here is a photo of our family taken right after Wildcraft! came out in 2007, back when it was still Kimberly and I running everything… And here is an updated photo… It’s hard to believe how far we’ve come, and it’s all thanks to YOU.

Here’s to our second decade AND here’s to the BRAND NEW LearningHerbs.com!

I so proud of all we have done, and incredibly thankful for all we’ve received.

About the Author - John Gallagher

John Gallagher, L.Ac. is founder of LearningHerbs and currently serves as Director of Mystery. He created the Herbal Remedy Kit and HerbMentor, and produced all the products we offer. John is a five element acupuncturist, home herbalist, musician, husband and parent.